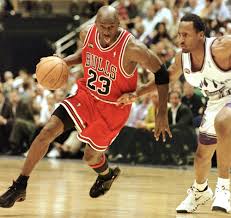 I believe there are some individuals in any organization that are simply so capable that they could do almost any job you asked. When you find one of these, you need to nurture, challenge, and constantly cherish that person.  Such a person has unlimited potential.  These individuals should represent the very core around which you can build your successful team.

However, most individuals have some limits in their abilities and/or potential. They may be highly capable in one role, but struggle in others.  For instance, that rare individual mentioned above likely possesses both strong technical and relational abilities.  They may be strong leaders, yet capable of making valuable personal contributions.  Most other individuals, though, must specialize, as least until they possess enough experience to diversify.

Michael Jordan is considered by most to be the best basketball player in history. Jordan led his teams to six NBA championships, led the league in scoring multiple times, was a perennial all-star, and is a member of the NBA Hall of Fame.  He may also have been one of the best defensive players of all time.  As good as he was at basketball, he was less than mediocre in baseball.  Mid-way through his career, he retired from basketball and began playing minor league baseball.  Even at the minor league level, his statistics and contributions were minimal (batting average below .250, excessive strike-outs, poor overall contributions offensively and defensively).  In short, though he was a superstar in basketball, he was below average in baseball.

The example of Michael Jordan is a good lesson for leaders in business. Yes, there are some superstars in multiple disciplines.  However, most individuals perform better where they have honed the skills, experience, and passion to perform with excellence.  Certainly, we need to help individuals expand their capabilities, but, depending upon the importance of the project or role, we may need to use functional experts.  Development of others is essential, but we may not be able to afford having less than proven superstars for critical roles.  We must work hard to find that perfect balance.  We may need the “basketball Jordan” – not the “baseball Jordan” for these critical roles.

Have a superstar day! I hope this is one that you remember fondly for years to come.

One thought on “The right person doing the right job”