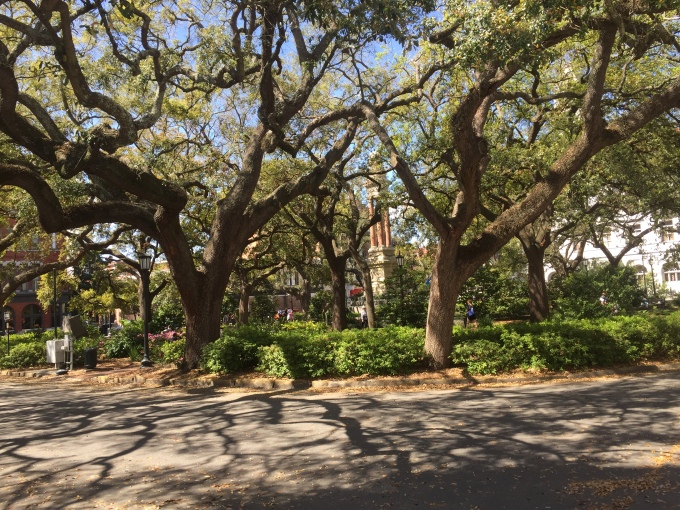 Savannah, Georgia, is a beautiful place! It is a city full of history that has been preserved and protected for us to enjoy today. In 1733, the newly inhabited city adopted a city plan championed by General James Oglethorpe that utilized city squares (e.g., green spaces for enjoyment and community) as the centerpieces for its neighborhoods. As the city grew and expanded, twenty-four squares were developed. Twenty-one of these still exist today and hold much of the beauty for which Savannah is known.

According to a tour guide driving a trolley around the historic district on our recent trip*, when automobiles came into prominence in the city, many citizens wanted to demolish the squares because they were outmoded in that new modern age. It simply took too long to drive around each of these squares as drivers navigated around the city. However, city planners and the advocates for eliminating the squares compromised. Instead of cutting roads through these squares effectively destroying them, they agreed to round the corners of many of them which allowed the squares to be retained, yet better accommodate the need for speed. As a result, we still can enjoy the squares today. And, it is doubtful that Savannah would have retained its place as a city of beauty without these tree-lined squares.

Compromise… so easy to say, but so hard to do! We lose so many opportunities to make the world a better place when we insist on “getting our way” with things. Sometimes, you wonder if there will ever be another piece of legislation through Congress that is bipartisan. We have all seen families split, friendships lost, deals forfeited, and opportunities wasted because of a lack of compromise.

So, what are the key components in the “art of compromise”? I think of 5 key things that, when done, will increase the odds significantly of a meaningful compromise:

In old Savannah, a failure to compromise on the city squares would certainly have resulted in a loss to all of us. We can thank those individuals that “gave some to get some” for saving those beautiful squares. What about you? Are you willing to move off your own immovable position for the greater good? Is there some opportunity in your life right now that can benefit from the 5 key elements of compromise listed above?

Thanks for what you do to make this world a better place. After all, today could be our best day yet! Don’t miss it!

*Hopefully, this is a true story.  I couldn’t verify it, but, in any event, it is a good story that ties into the theme of compromise.

One thought on “The art, and beauty, of compromise”